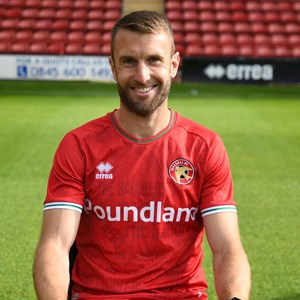 Andy Williams joined the Saddlers from Cheltenham Town in June 2022.

Williams began his professional career at Hereford where he made his debut in the Conference against Northwich as an 82nd minute substitute in a 4-0 win.

Over the course of his career to date, he has amassed over 680 appearances in all competitions, scoring a total of 156 goals in four separate divisions.

In his breakthrough season with Hereford in 2005/06, Williams scored 12 goals, including one in the Conference play-off final, as the Bulls secured promotion back into the Football League.

After two years with Hereford at the start of his career, Williams moved on to play for Bristol Rovers in the summer of 2007 where he played 102 times for the Pirates, scoring 10 goals.

Williams went on to play for Yeovil Town, Swindon Town and Doncaster Rovers in the next eight seasons, all of which would be played in League One and the Championship.

His best goal scoring season came whilst with Swindon in the 2014/15 campaign where he helped them get to the play-off semi-finals after netting 22 times during that year.

In May 2018, he made the move to League Two side Northampton Town and stayed with the Cobblers for two years, making 85 appearances and scoring 21 goals, including one in a 4-0 triumph over Exeter City in the play-off final in 2020 as the Cobblers went on to win promotion to League One.

Upon the expiry of his contract with Northampton, he made the move to Cheltenham where he scored 14 goals during his two years at the Completely-Suzuki Stadium and played a key role in helping Michael Duff’s side win the Sky Bet League Two title in 2021.