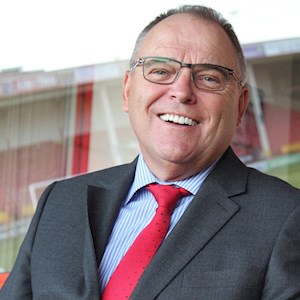 Born in Rushall, Nigel is a lifelong Walsall supporter.

Nigel formed Cavalier Fasteners in 1985 and, alongside his business partner, grew the company to a multi-million pound turnover business.

Based in Walsall and more latterly Aldridge; Cavalier Fasteners supplied specialist fasteners for a multitude of industries and Nigel was involved high profile project such as the Channel Tunnel and Docklands. Nigel sold Cavalier Fasteners to a multi-national business in 2008.

Nigel joined the Board of Directors in 2005, somewhat by chance. After a disappointing result on an innocuous Saturday, then manager Paul Merson made it public that the team were to train on Sunday. Just as livid with the defeat and performance of the team as the manager; Nigel made his way to the training ground that Sunday to make sure Merson was as good as his word and a chance meeting with then Chairman, Jeff Bonser, eventually resulted in Nigel joining the Board. His business acumen, love for the club and local contacts made him an obvious addition.

During his time as a Director, Nigel has sat on the Club’s Youth Development Committee, a position he still holds, and the Community Programme’s Board of Trustees, a position he relinquished earlier this year after 14 years.

As well as his role at Walsall, Nigel is a member of Walsall Cricket Club where he served a four year maximum term as President, and is a Business Mentor for the Prince’s Trust.