Walsall will be looking to end a productive week by collecting three points against Salford City.

The Saddlers earned a point away at Exeter City before Tuesday’s penalty shootout triumph over Northampton Town.

Matt Taylor’s side will be up against a side with a good record at the Banks’s Stadium who will provide another tough test.

We take a closer look a Salford in our opposition guide.

Gary Bowyer joined Salford in March 2021, initially on a short-term deal before signing a two-year deal at the Peninsula Stadium in the summer.

He joined with 11 games of the 2020/21 season to go and his arrival sparked an upturn in form. Despite picking up six wins and two draws, it wasn’t enough to make the play-offs as they missed out by two points.

Bowyer brings a lot of experience to the table having began his coaching career in the early 2000s. After spells at Ilkeston and Derby County, he was appointed Under 18s coach at Blackburn Rovers in 2004. Four years later, he became Rovers’ reserve team manager. He had two spells as caretaker manager before he was given the role on a permanent basis in May 2013.

In his first full season in charge, Bowyer guided Rovers to eighth in the Championship, just two points adrift of the play-offs. They finished ninth in the 2014-15 and also reached the quarter-finals of the FA Cup, losing to Liverpool in a replay.

In November 2015, Bowyer parted company with Blackburn. His next managerial role came in the summer of 2016 when he was appointed manager of Blackpool.

His first season proved to be a success as he led them to promotion from League Two with a 2-1 victory over Exeter City in the play-off final.

He helped the Tangerines consolidate in League One with a solid 12th place finish.

Bowyer resigned as manager of Blackpool in August 2018.

He also had a spell at Bradford City before he returned to Derby as coach of their Under 23s side in September 2020 before his initial switch to Salford in March.

Salford possess plenty of talent in their squad. Winger Ash Hunter has impressed at this level and scored eight times in all competitions last season with one coming against the Saddlers back in December.

Midfielder Matty Lund is another one to watch. He won promotion from League Two with Rochdale in 2014 and has plenty of experience in League One as well as also played as high as the Championship during his career.

Salford’s main marksman is Ian Henderson, who netted 18 goals last campaign. He has missed the last four matches and may miss tomorrow’s encounter.

After an indifferent start to the season, Salford have picked up seven points from their last four league matches.

They picked up their first away league victory of the season last weekend against Colchester United as goals from Brandon Thomas-Asante and Tom Elliott helped them to a 2-0 victory. They had lost all four of their previous away league games before that match.

There have only been four meetings between the two clubs with the first coming almost exactly two years ago.

Salford have won three of the four meetings with the only Walsall win coming in January 2020 at the Peninsula Stadium with goals from Josh Gordon and Caolan Lavery helping the Saddlers to a 2-0 victory.

The Ammies have scored five and conceded zero in their previous two visits the Banks’s Stadium. 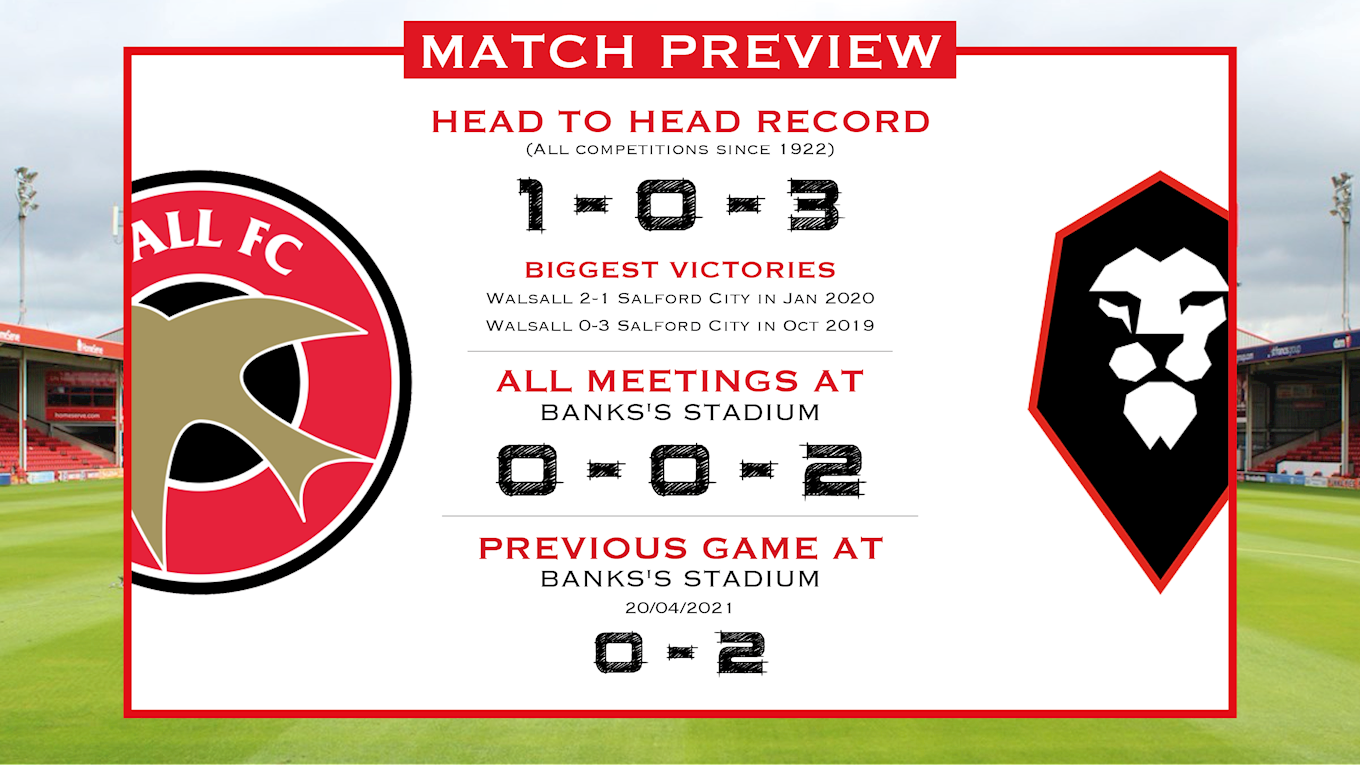 There are a handful have players to have played for both clubs.

Striker Rory Gaffney scored 11 times for Salford in the National League during their promotion winning 2018-19 campaign.

He joined the Saddlers later that summer and scored once in 22 outings in the West Midlands before his departure in February 2020.

Other players to play for both clubs are Tyreik Wright, who spent the second half of last season on loan at the Banks’s Stadium, and Salford’s most recent signing Aramide Oteh who had a loan spell with the Saddlers in 2019. 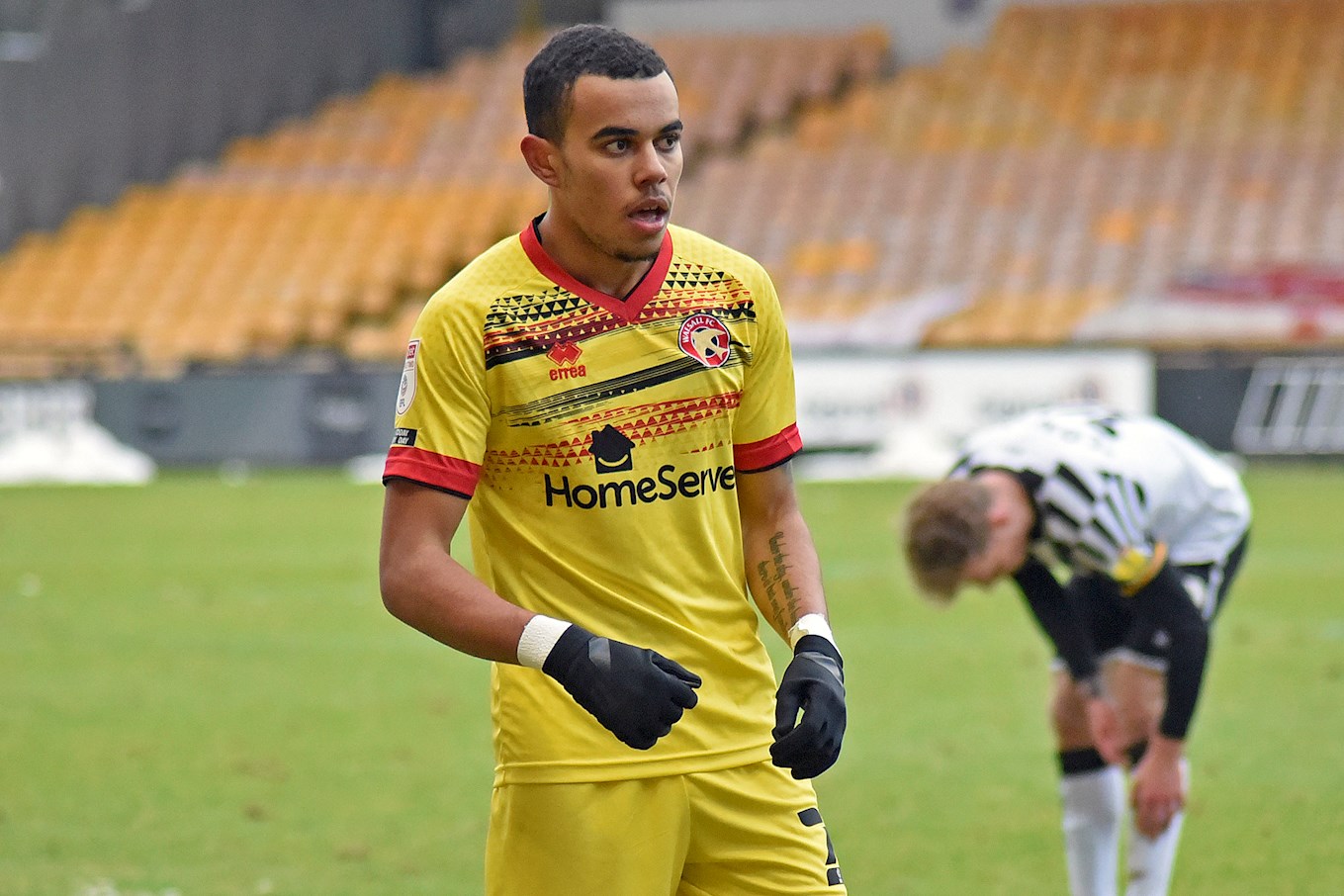