We take a closer look at tonight's opponents Cambridge United in our Opposition Guide.

Mark Bonner guided Cambridge United to the third tier of English Football for the first time since 2002 last season.

Cambridge finished second in League Two with 80 points, securing automatic promotion with a 3-0 victory over Grimsby Town on the final day.

Bonner has been at Cambridge since 2011, having various roles in the academy before he was named as first team coach in 2018.

He worked as assistant to Joe Dunne and Colin Calderwood before temporarily taking charge in January 2020.

He began with four consecutive wins before being appointed as permanent manager in March 2020, just before the season was cut short due to the COVID-19 pandemic.

Bonner oversaw promotion to Sky Bet League One in his first full season in charge.

ONE TO WATCH: JOE IRONSIDE

Joe Ironside’s contributions to Cambridge’s promotion may have gone slightly under the radar last season given Paul Mullin’s exploits.

Mullin bagged 34 goals in all competitions but Ironside chipped in with 14 league goals and played an important part as they finished second.

The 28-year-old has eight goals to his name already this season as he looks to take on the goalscoring responsibility since Mullin’s departure.

Cambridge have struggled for form in recent weeks with just on win from their last seven games in all competitions.

That win came in an FA Cup replay against Northampton Town two weeks ago and their last league triumph came on Tuesday 2nd November against Morecambe.

They have been better at home this season with Saturday’s defeat to Sunderland their first at the Abbey Stadium in six matches. Overall, they have lost just three of their 15 home matches this season.

Cambridge and Walsall have met 15 times overall with the first coming in 1973.

The Saddlers have won eight while the U’s have five victories.

Cambridge won both league matches against the Saddlers last season.

Walsall’s last win away at Cambridge came in January 2001 as Jorge Leitao’s goal secured a 1-0 win. 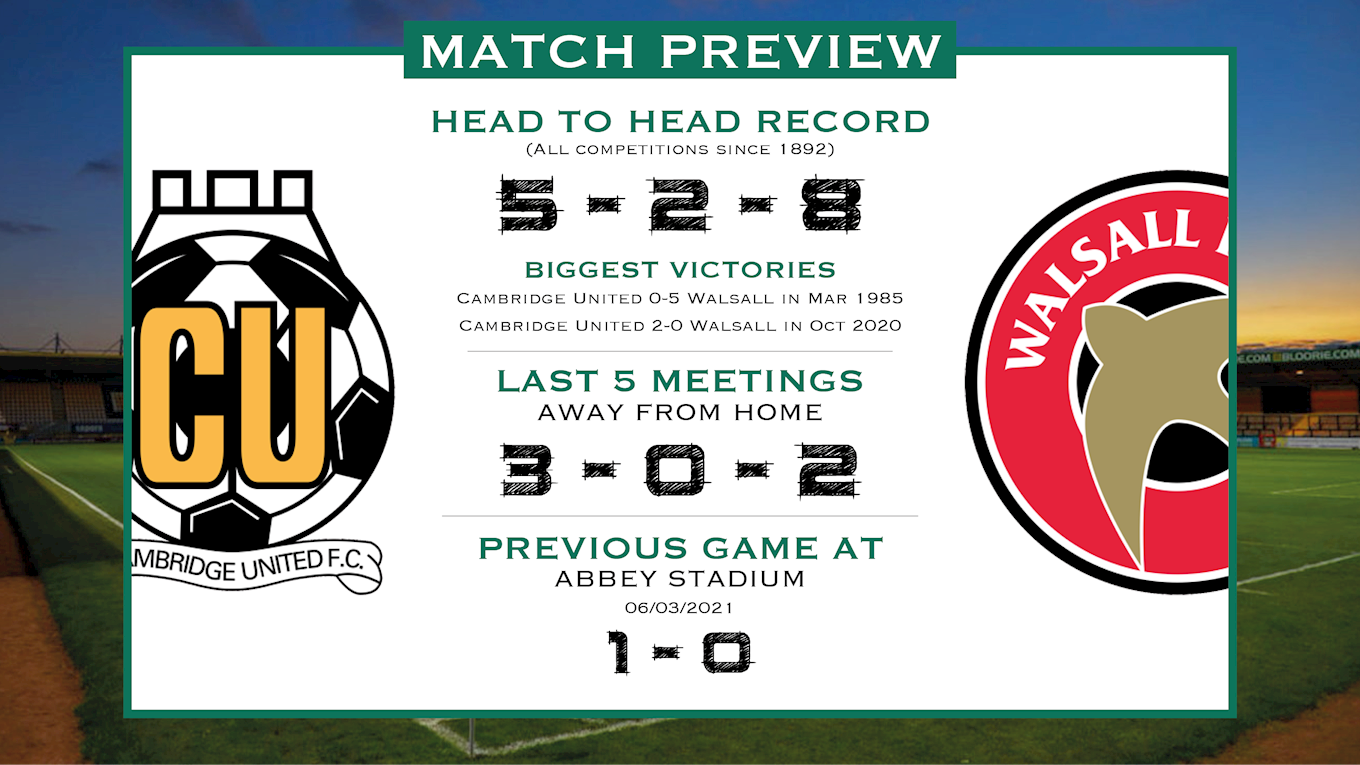 A 4-1 victory over Oxford United before a 1-0 triumph over Tottenham Hotspur U21s meant defeat away to Stevenage on matchday three didn’t prevent them from advancing to the knockout stages.