The 32-year-old recently returned from injury and helped the Saddlers to earn a win and a draw against Forest Green Rovers and Newport County respectively.

Results have been up and down for Darrell Clarke’s side this season but nonetheless, Sinclair is proud to represent a club he feels has a huge history and he’s called upon his teammates to write their own story in the near future.

This is a big club and a has a huge history so just on that point it’s a pleasure to play for,” Sinclair said.

“Obviously, you want to look forwards and we want to create our own history and the supporters and community are part of that.

“It’s trying to make sure we carry pushing in the same direction. I think that’s important. I think they (fans) can see that and I think they get frustrated but I don’t see a problem with that.

“I’d rather them get frustrated because that means they care. I get the same. After the 0-0 on Tuesday I was in a funny mood because I didn’t feel like it was football and it’s frustrating but today, I feel better and tomorrow I will even more so and I want the fans to feel the same.”

Northampton currently occupy a play-off spot but Sinclair is feeling confident after a positive week for the Saddlers.

“I think this week is a good marker. Forest Green and Newport pushed for the players last year so Saturday is hugely important,” he added.

“If we can set another marker and have a good week from these three games then that gives us a marker or form of judgement.” 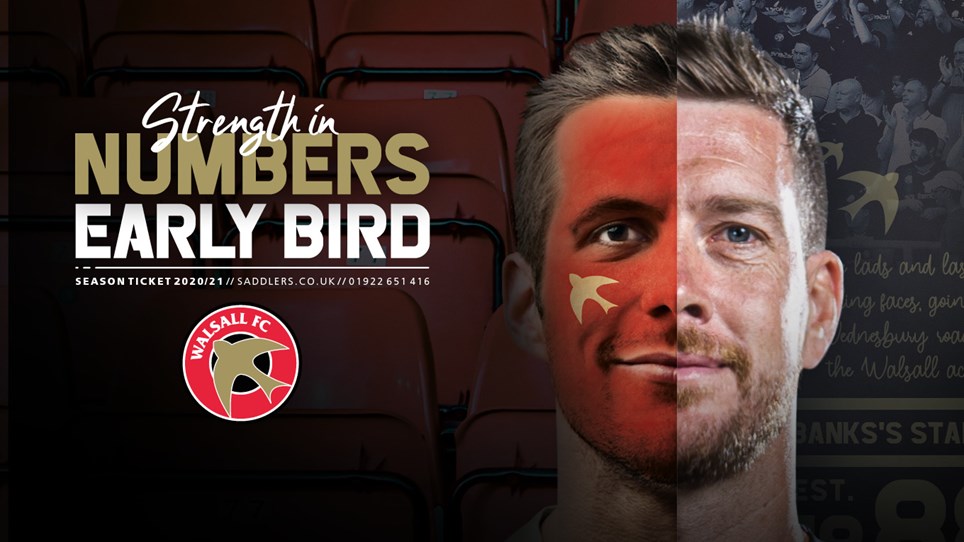 
Walsall Football Club are looking for #StrengthInNumbers in our Early Bird campaign for the 2020/21 season as we look to reward fans based on the total number of season tickets that are sold.


Walsall Football Club is once again offering youngsters the chance to watch FREE football at the Banks’s Stadium if they secure their season ticket during the Early Bird period.


Walsall Football Club can confirm the Early Bird period has been extended until Tuesday 7th April to coincide with the introduction of a three-month instalment plan to aid supporters purchasing...


Walsall Strength & Conditioning Coach Mark Bradley has set up a training programme for the Saddlers players during this period of isolation.