Ryan Pratt recalls past Saddlers matches and other footballing events on this day...

Following a 1-1 draw at home to Oldham Athletic in their first game of the League One season, the Saddlers were on the road for the first time with a Capital One Cup first-round tie away to Championship outfit Nottingham Forest. After losing their first game 1-0 to Brighton, Forest were looking to bounce back their first game in front of the home fans. Walsall, who had not lost to Nottingham since February 2000, were aiming to cause a cup upset and spoil the Tricky Trees’ night.

Walsall enjoyed a perfect start to the game with two goals in the first 15 minutes. Hardworking striker Tom Bradshaw opened his account for the season on 11 minutes when the electrifying Milan Lalkovic accelerated past Forest full-back Eric Lichaj and hit a cross-shot that De Vries palmed away, but Bradshaw pounced upon the rebound to slot home. In the 14th minute, Bradshaw had his second. Teenage left wing-back Rico Henry fed central midfielder Sam Mantom, whose terrific cross was met forcefully by the advancing Bradshaw.

Forest did half the deficit just after the half-hour mark when former Saddler Jamie Paterson’s low cross was tapped home by 18-year-old striker Tyler Walker at the far post. This was Walker’s second Forest goal in nine appearances, doubling his father Des’ total during his lengthy career at Forest, where he made 346 appearances. In first-half injury-time, Paterson’s well-hit effort struck the upright as Forest threatened to restore parity.

With 11 minutes from time, Walsall substitute Romaine Sawyers scored from a rebound after De Vries parried a shot by Kieron Morris which the home side failed to clear.

Tricky Trees sub Michail Antonio smashed the ball home from 25 yards after an impressive run before going on to level the scoring with a cheeky back-heel in the 90th minute.

Antonio’s well-worked brace had seemingly forced the game into extra time. However, deep into injury time, referee Darren Handley blew his whistle and pointed to the spot after central defender Kelvin Wilson brought down Bradshaw. The 23-year-old walked to the spot and calmly put the ball beyond De Vries, completing his hat-trick to put his side 4-3 ahead and cap a man of the match, Roy of the Rovers like performance.

The win saw Walsall progress into the next round of the Capital One Cup, with a home tie under the lights at the Banks’s against Brighton awaiting them. The result continued the Saddlers’ remarkable hoodoo over Forest, having won seven and drawn four of the last 11 encounters dating back to 2000.

OTHER SADDLERS FIXTURES ON THIS DAY

Neither James Walker nor Lee Harper were troubled between the sticks as this League Cup first-round tie finished honours even, but QPR won the replay 3-1 after extra time.

Newly-promoted Division One outfit Walsall took the honours in this West Midlands derby as Albion failed to impress on the first day of the 2001/02 season.

Walsall took the lead in the 37th minute when Brazilian winger Moreira Erivelto raced past Neil Clement before crossing for Portuguese striker Jorge Leitao to head past Russell Hoult.

The Baggies got a well-deserved equaliser in the 56th minute when Neil Clement hammered in a stunning free kick from 25 yards.

But Walsall bounced back to regain the lead and win the match six minutes later. Defender Tony Barras saw a header from Dean Keates' free-kick parried by Hoult, but he was first to react to the rebound and stumble the ball over the line.

Striker Tommy Mooney marked his Walsall debut with a goal that earned the Saddlers a point.

Carlisle dominated the first half and fully deserved the 19th-minute lead given to them by Welshman Kevin Gall, who fired home midfielder Simon Hackney's pass.

But Mooney celebrated his 36th birthday with a left-foot finish two minutes after the break that went in off the post after good work by full-back Paul Boertien.

League Two’s Accrington Stanley moved into the second round of the Carling Cup after a last-gasp victory over League One Walsall at the Crown Ground.

After nine minutes the Saddlers opened the scoring when Jamie Vincent's free-kick was volleyed home by Alex Nicholls from eight yards out.

But the Saddlers faced an uphill battle after 35 minutes as captain Rhys Weston picked up two bookings in 11 minutes, reducing the away side to ten men.

Stanley substitute Bobby Grant, on the pitch for only three minutes, then punished Walsall after they failed to clear a bobbling ball in the area, firing home after 53 minutes.

Striker Paul Mullin went on to head home in injury time to make it 2-1 and give Accrington the win at the death.

A debut strike by Ashley Hemmings sent Walsall into the second round of the Capital One Cup at the expense of 10-man Brentford.

The former Wolves winger took his chance superbly with a fierce eighth-minute left-foot drive after Bees skipper Kevin O'Connor had done well to block a Will Grigg shot.

After starting brightly with Harry Forrester and O'Connor going close, the visitors' hopes of a comeback faded in the 25th minute when Jake Reeves was sent off for a foul on Adam Chambers.

Both keepers, David Grof and Simon Moore, were called into action on numerous occasions, maintaining their concentration to make some superb saves and keep their teams in the game. But the Saddlers saw the game out and sealed a win and a place in the next round of the Capital One Cup in their first game of the season. 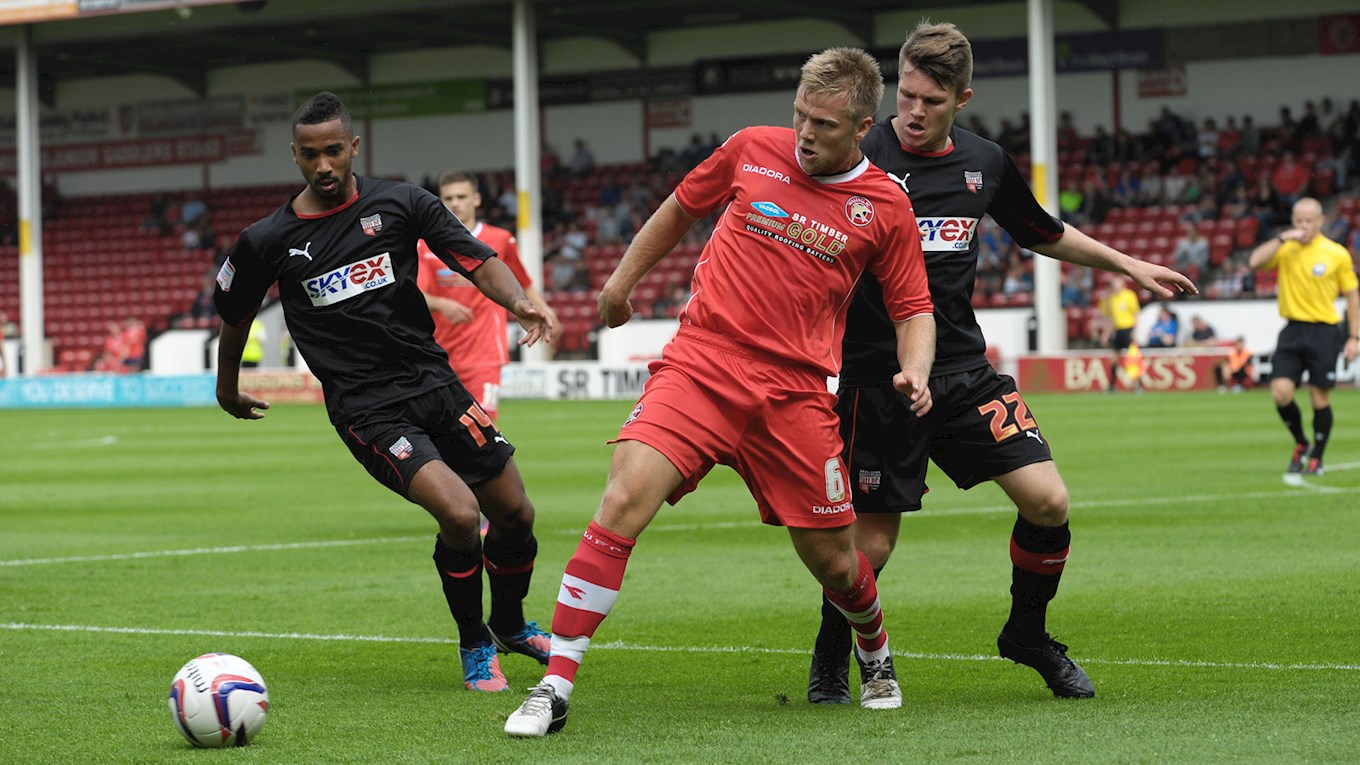 FOOTBALLING EVENTS ON THIS DAY

1971 - Today is the 47th birthday of former Walsall striker Tommy Mooney. Mooney spent one season with the Saddlers during the 2007/08 campaign, scoring 12 goals in 40 appearances.

Mooney began his career at Aston Villa in 1989 before moving to Scarborough, where he made 129 appearances, netting 40 goals. After a season at Southend United, the forward joined Watford in 1993, where he made a name for himself, scoring 65 goals in 288 games.

Successful spells at Birmingham City, Stoke City, Sheffield United, Derby County, Swindon Town, Oxford United and Wycombe Wanderers followed before Mooney linked up with the Saddlers in 2007. He ended his playing career with UD Marbella in the third level of Spanish football in the Segunda División B.

1991 - The most bizarre postponement? The Worthington Cup tie between Torquay United and Portsmouth was called off because of... a total eclipse of the sun! The police decided that they didn't have the manpower to police both the match and the influx of visitors expected in the area to witness the eclipse. The eclipse couldn't be put off – so the match was!

1996 - The 74th annual Charity Shield took place on this day and was contested between Newcastle United and Manchester United, who won 4-0 with goals from Eric Cantona, Nicky Butt, David Beckham and Roy Keane, in front of a 73,214 crowd at Wembley.

1999 - While the Spice Girls topped the UK Charts with their hit song ‘Wannabe’, goals from Julian Joachim, Dion Dublin and Ian Taylor gave Aston Villa maximum points and two wins out of two in the Premier League after a 3-0 victory over 10-man Everton.

1999 - On the 46th birthday of wrestling superstar Hulk Hogan, Leeds striker Michael Bridges’ superb hat-trick condemned Southampton to a 3-0 loss and their first home defeat at the Dell since Boxing Day 1998.

2010 - England captain Steven Gerrard scored twice in four second-half minutes as the Three Lions came from behind to defeat Hungary in their first outing since their awful 2010 World Cup campaign.