Ahead of the Saddlers’ first game of the 2018/19 season at home to Plymouth Argyle this afternoon, Ryan Pratt takes a look back at ten of the club’s most memorable opening-day fixtures...

Erhun Oztumer's glorious free-kick and a Simeon Jackson double handed League One new boys AFC Wimbledon a rude awakening as they slipped to an opening-day defeat at Walsall. Oztumer - a summer signing from Peterborough - curled in a 25-yard free-kick off the post to put Walsall ahead just seven minutes in before the Saddlers doubled their lead on 38 minutes as the Dons' defence made a hash of dealing with a floated Oztumer free-kick and fellow new boy Simeon Jackson bundled home from close range. Walsall put the game to bed on 72 minutes when Jackson tucked home substitute Amadou Bakayoko's cross on the volley from close range. Wimbledon claimed a 90th-minute consolation when Taylor picked himself up to fire home from the spot after being hauled down by Walsall full-back Rico Henry.

Striker Craig Westcarr scored two goals and made another as Dean Smith’s new-look Walsall side ran out victors against Tranmere Rovers. The 2013/14 season was just two minutes old when the Saddlers took the lead as Adam Chambers delivered an inviting ball in from the right of the area which was seized upon by Craig Westcarr to fire home. Walsall went further ahead when Westcarr found debutant Milan Lalkovic, who made no mistake as he tucked the ball home to make it 2-0. Andy Robinson's free-kick gave Rovers hope but Westcarr's cool finish after beating the offside trap from a Lalkovic pass ended a good day’s work for the Saddlers.

Walsall midfielder Adam Chambers scored a first-half 30-yard screamer on his debut against his former club Leyton Orient, who released him three months earlier. Ben Chorley could have got the O's on level terms soon after but he failed to hit the target with his header from Charlie Daniels' corner. Jon Macken squandered a good chance to double the lead but he fired over. Walsall keeper Jimmy Walker denied Dean Cox and Jimmy Smith headers and Orient striker Jamie Cureton missed two good chances as the hosts started their campaign with a win.

Andrew Whing’s first half own goal was enough to give Walsall a slender win as Brighton's first home opener for 10 years ended in defeat. Walsall's promising start was rewarded when Whing headed a deep Rhys Weston cross into his own net in the 30th minute under pressure from Troy Deeney. Brighton improved after the break and nearly equalised when sub Nicky Forster put a glancing header just over. Walsall were forced to defend for much of the second half but saw the game out for a clean sheet and an impressive three points to kick-start their League One campaign. 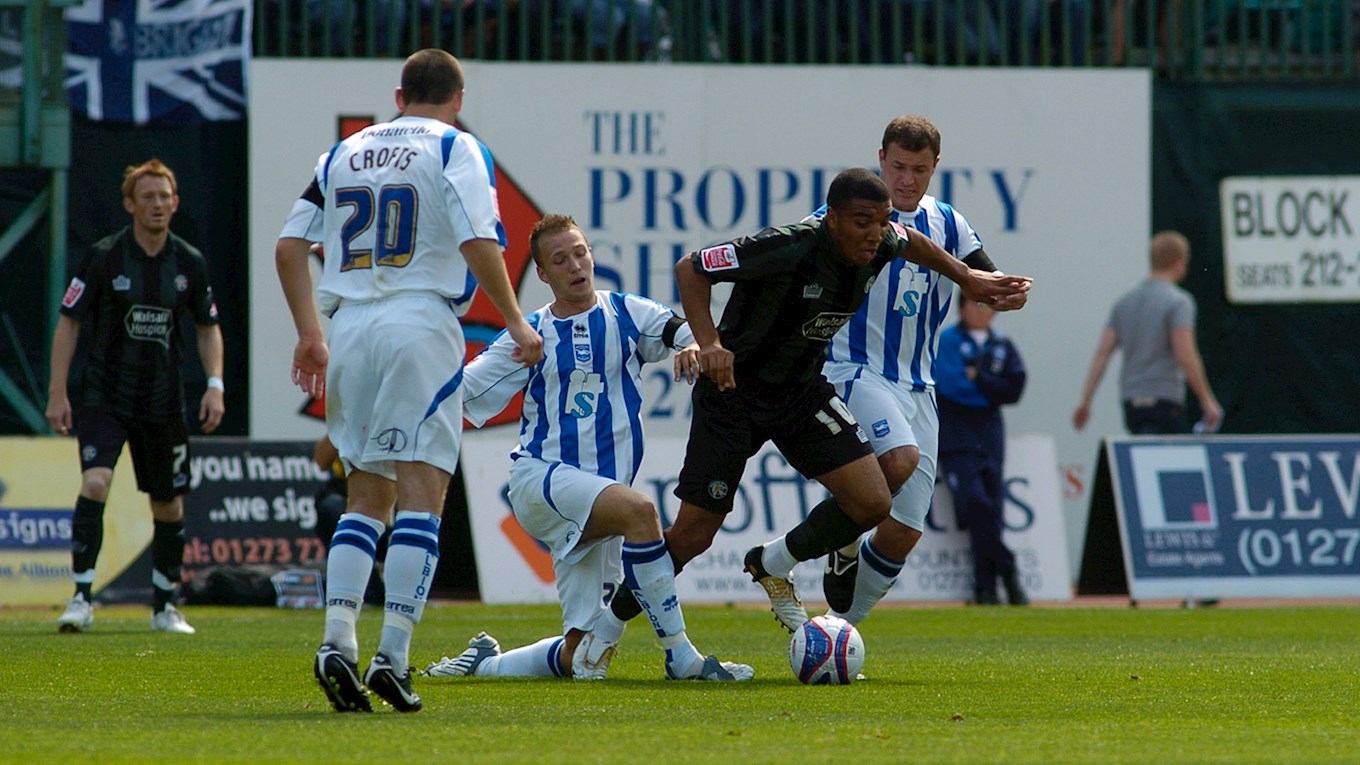 Walsall’s 2006/07 League Two title-winning season opened up with a 1-0 win at Spotland, as Martin Butler’s goal three minutes after half-time put the Saddlers on the path to victory. The visitors had the better chances, not least when Hector Sam intercepted a poor back-pass only for goalkeeper Matt Gilks to recover. Mark Wright and Butler both came close with volleys while Gilks made a fine save from Anthony Gerrard. Just after the break, Sam played in Butler who fired home to see off Rochdale, who only really threatened through two Rickie Lambert free-kicks.

Rotherham goalkeeper Gary Montgomery gifted Walsall victory with a disastrous injury-time blunder. Jorge Leitao's speculative lob into the penalty area saw Montgomery completely wrong-footed and the keeper could only palm the ball into his own goal. Kris Taylor's strike had given the visitors an early advantage before Martin Butler headed the Millers level from a superb Deon Burton cross, however Montgomery's late error ensured Walsall took maximum points from this opening day fixture of the 2005/06 campaign.

Newly-appointed Saddlers chief Paul Merson got off to a winning start in sweltering conditions at the Banks's Stadium as teenage debutants Leroy Williams and Daryl Taylor earned victory for Walsall as both teams had a man sent off. Matty Fryatt put the Saddlers ahead from the spot on 12 minutes but Billy Paynter headed a 61st-minute equaliser, only to be sent off for over celebrating. Walsall defender Ian Roper was also sent off, as were Vale manager Martin Foyle and Saddlers coach Iffy Onuora. Williams and Taylor came off the bench, both scoring to make it 3-1, before Vale forward Lee Matthews netted a last-minute consolation.

Debutant Paul Merson scored twice in a man-of-the match display, inspiring Walsall to a stunning opening-day victory against promotion-favourites Albion. Despite losing defender Ian Roper to a facial injury after 10 minutes, the home side soon took a firm grip of the match. They broke the deadlock on 18 minutes when Merson bagged his first of the afternoon. It was a sweet finish from the former England midfielder, who left Russell Hoult clutching at thin air with a right-foot volley that flew into the top, left-hand corner of the net. Merson then doubled his and Walsall's tally seven minutes before the break when Joost Volmer, one of four Albion debutants, failed to clear the danger following a cross from the left, allowing the Saddlers skipper to drill the ball home off the underside of the crossbar. With the half-time interval beckoning, the Baggies found themselves in deeper trouble when Saddlers forward Jorge Leitao tapped home from close range after Simon Osborn's shot had cannoned back off a post to give Walsall a three-goal lead. Any hopes of an Albion comeback were extinguished within 12 minutes of the restart when Walsall claimed their fourth goal through former Wolves midfielder Steve Corica with a wonderful dipping volley. Wales international Jason Koumas pulled a goal back for Gary Megson's side, but it failed to ruin the home side’s dominant derby day win. 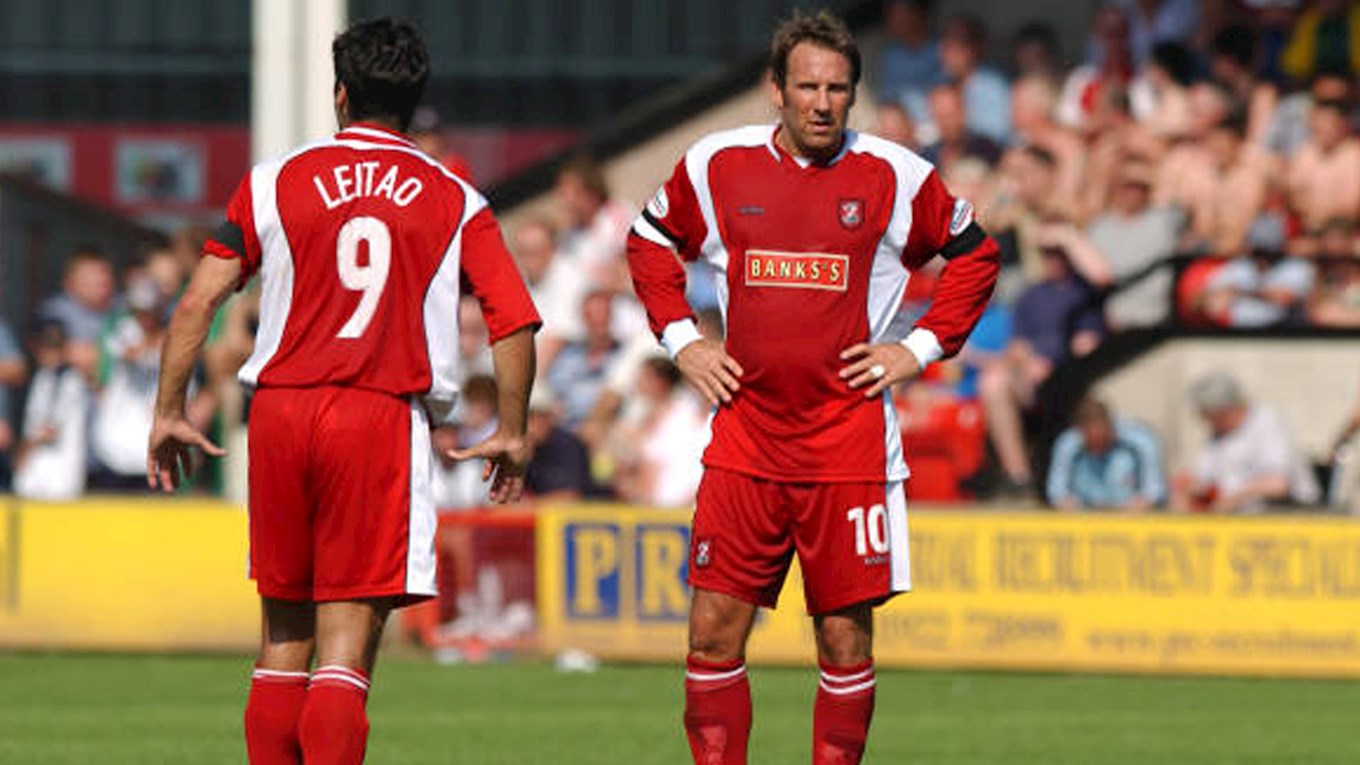 Newly-promoted Division One outfit Walsall took the honours in this West Midlands derby as Albion failed to impress on the first day of the 2001/02 season. Walsall rode their luck at times during the first half-hour but took the lead in the 37th minute when Brazilian winger Moreira Erivelto raced past Neil Clement before crossing for Portuguese striker Jorge Leitao to head past Russell Hoult between the sticks for Albion. The Baggies got a well deserved equaliser in the 56th minute when Neil Clement hammered in a stunning free kick from 25 yards. But Walsall bounced back to regain the lead and win the match six minutes later. Defender Tony Barras saw a header from Dean Keates' free-kick parried by Hoult, but he was first to react to the rebound and stumble the ball over the line to claim the winning goal for the Saddlers.

Rotherham allowed a two-goal lead to slip from their grasp on their Second Division debut as they crashed to a 3-2 home defeat against Walsall. Former Saddler Mark Robins got Rotherham's first after 42 minutes with a controversial twice-taken penalty. Then, eight minutes into the second half, he added a second when Leo Fortune-West's brilliant reverse pass sent him clear of the Walsall defence with only keeper Jimmy Walker to get past. But two minutes later Brett Angell headed the first of his brace from Paul Hall's cross to energize a Walsall fight-back. After 71 minutes, Walsall had Millers defender Marvin Bryan to thank when inexplicably headed into his own goal. Seven minutes later, Angell completed the Walsall comeback with a flick header from Gabor Buckran's cross, completing an impressive comeback and sealing an important three points away from home on the opening day of the 2000/01 season.