Ahead of tonight’s Carabao Cup first-round tie away to Tranmere Rovers, Ryan Pratt takes a look back at ten of Walsall’s most memorable League Cup wins since 2000.

We start off by taking a look at our most recent League Cup triumph, a 2-1 win over Brighton & Hove Albion in 2015...

The Saddlers came from behind to beat Championship opponents Brighton and earn a League Cup tie with Chelsea in the third round of the competition. Jake Forster-Caskey put the Seagulls ahead with a penalty after he had been fouled in the box by Paul Downing. Milan Lalkovic equalised for the hosts before Brighton's Chris O'Grady blazed over the bar from the penalty spot. Rico Henry then completed the Saddlers' comeback, as he fired in a left-footed shot from Romaine Sawyers' cross.

Tom Bradshaw's hat-trick earned League One side Walsall a shock win over Nottingham Forest in a dramatic Capital One Cup first-round tie. Bradshaw scored two quick first-half goals but Tyler Walker - son of former Forest defender Des - made it 2-1 with a tap-in before half-time. Romaine Sawyers fired home Walsall's third with 11 minutes remaining. Forest substitute Michail Antonio smashed home his first from 25 yards with nine minutes to go after a fine run and then backheeled the equaliser in the 90th minute to complete a brace and draw his side level. But Bradshaw was brought down by Kelvin Wilson in the fifth minute of injury-time before going on to net from the spot to dump the Championship side out of the competition.

Walsall claimed victory over League Two side Southend in the first round of the League Cup at Roots Hall. Malvind Benning opened the scoring for the Saddlers, converting Andy Taylor's cross from close range. Walsall's Tom Bradshaw had a goal disallowed for offside before Southend equalised through Ryan Leonard's driven shot midway through the second half. However, Saddlers substitute Kieron Morris sealed victory with a strike from outside the box to see Walsall into round two.

James Baxendale’s late winner booked Walsall’s place in the Capital One Cup second round. The Saddlers broke the deadlock on the stroke of half-time, Ashley Hemmings firing home after Adam Chambers’ header had struck the bar. Vale drew level when Chris Lines’ free-kick was nodded in by Chris Robertson, but Baxendale’s bending 20-yard effort, six minutes from time, ensured Walsall progressed into the next round.

A debut strike by Ashley Hemmings sent Walsall into the second round of the Capital One Cup at the expense of 10-man Brentford. The former Wolves winger took his chance superbly with a fierce eighth-minute left-foot drive at Bescot after Bees skipper Kevin O'Connor had done well to block a shot from Saddlers striker Will Grigg. After starting brightly with Harry Forrester and O'Connor going close, the visitors' hopes of a comeback faded in the 25th minute when Jake Reeves was sent off for a foul on Adam Chambers. Both David Grof and Simon Moore in net for the two sides were called into action on numerous actions, maintaining their concentration to make some superb saves and do well to keep the scoreline down and keep their teams in the game, but the Saddlers saw the game out and sealed a win and a place in the next round of the Capital One Cup in their first game of the season. 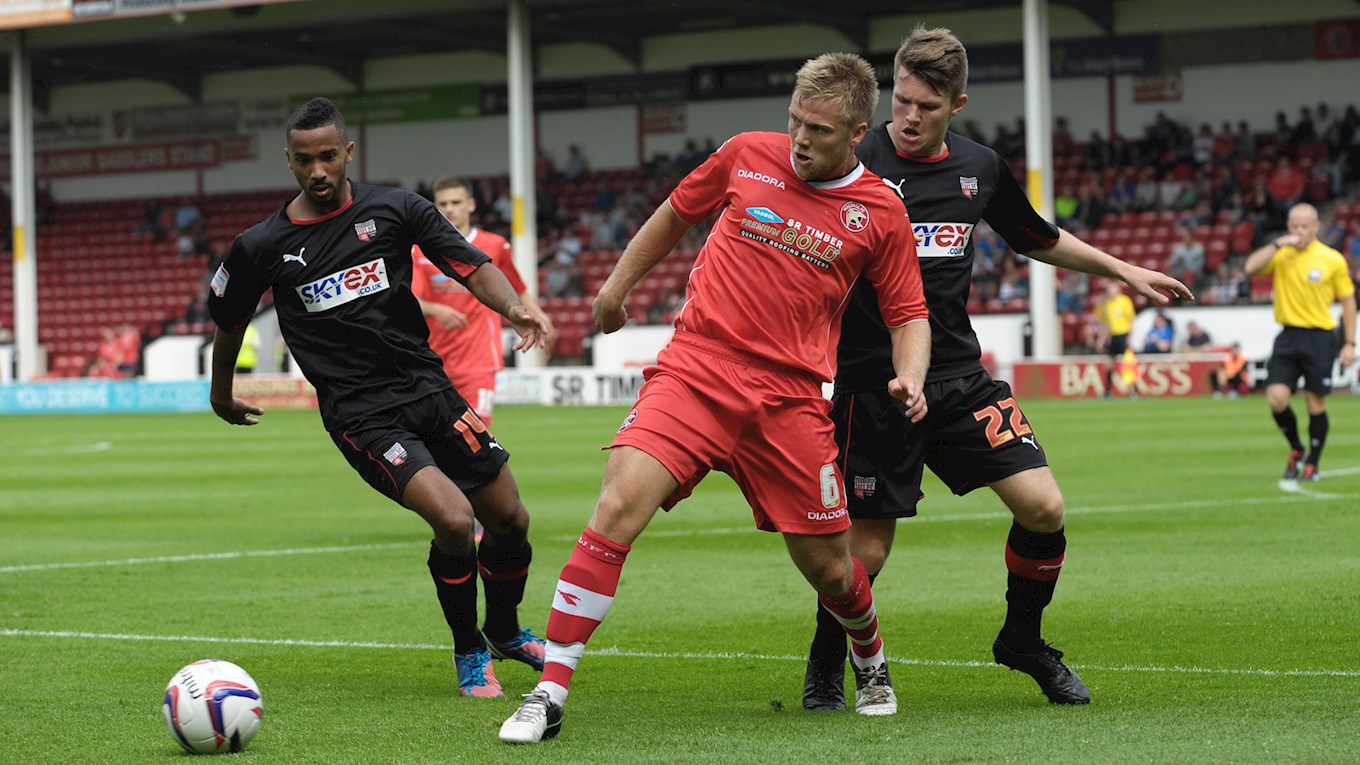 Scott Dann struck his first senior goal to give League Two side Walsall a deserved Carling Cup win at Plymouth. Dann calmly turned in from 12 yards with his first touch five minutes from time from Mark Wright's cross. Nick Chadwick wasted Plymouth's two best chances in the first half, firing over from four yards and then heading another good opportunity wide. Dean Keates was off target for Walsall, but substitute Dann was the hero late on to stun Ian Holloway's side.

A gusty effort by a second-string Carlisle side was not enough to halt Walsall, who progressed to the second round of the Carling Cup. After a fairly even opening half-hour it was Carlisle who surprisingly took the lead in the 32nd minute when Craig Russell left the Walsall defence flat-footed and lobbed James Walker. Their lead was short-lived though as Paul Merson quickly got the Saddlers back on level terms as he beat the defence to drill the ball into the bottom right-hand corner. Carlisle were unlucky not to take the lead inside the opening minutes of the second half but Brian Wake's 20-yard drive came back off the underside of the bar. They were made to pay almost immediately when Jorge Leitao was set up by Merson and the striker chipped keeper Matt Glennon to make it 2-1 as the Saddlers went on to see the game out and edge through to the next round of the League Cup.

Two goals in the space of three first-half minutes saw Walsall reach the third round of the Worthington Cup with a deserved win. Goals from Jorge Leitao and Brazilian striker Junior gave the Saddlers their second 2-1 victory over Forest this season following a 2-1 win at the Bescot two months earlier, putting them into the next round with a tie away to Blackburn Rovers facing them.

Jorge Leitao’s 23rd-minute strike sealed victory for the Saddlers against rivals Shrewsbury Town, seeing them into the second round of the League Cup with an away draw at Nottingham Forest awaiting them (see match report number eight above).

Saddlers’ substitute Darren Byfield struck seven minutes from time as unbeaten Walsall ended Kidderminster's gallant fight, the Saddlers winning 1-0 on the night and 2-1 on aggregate after the first leg ended in a 1-1 draw at the Bescot Stadium. Byfield curled a 25-yard effort into an empty net after a mix-up in the Kidderminster defence. A throw in by Kidderminster's Craig Hinton put keeper Stuart Brock under pressure and the ball broke for Byfield to pick his spot. It was a cruel way for Kidderminster to bow out of the competition, having repelled everything the Division Two leaders could throw at them. Kidderminster had a glorious chance to take the lead in the 16th minute but Stuart Hadley headed into the side-netting from Andy Ducros' cross with the goal at his mercy. Brett Angell had two clear-cut chances for Walsall but had one header saved by Brock and mis-directed the other.